black rivers of tar
like cold lava they are

made by human hand
cutting through the land

with time passing by
no human left to cry

all labour was in vain
nature takes over again 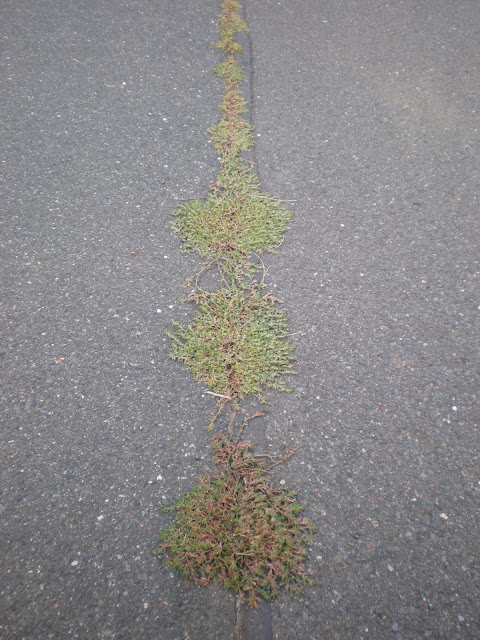 "Welcome back to work, Jan! And as you wanted we have left all the incoming papers on your desk." What a greeting!! And then Steve had hugged him as if he had been gone for months! A warm welcoming hug, nonetheless so strong, he felt being suffocated by it. Glancing over at his desk he thought that maybe it truly had been months from the height of the pile on it. However, it had only been a normal Summer vacation, four weeks in all. If he had known how accurately his request to leave the incoming papers untouched would be followed through, he surely would not have asked for it. And, if he had known before how this unexpected vacation would be like he might even had refused to go. Yes, sometimes it would be good to know what awaits you. On second thought, he would never have had all those adventures and all those experiences. Yes, it was good as it was.

It all had started with that radio commercial. People were being asked to tell them who would deserve a special vacation for being the best, nicest and always helpful person at work. Jan had suggested that they would participate in this. All five of them here at work were a great team, like a family. He never had thought that his colleagues would pick him. He was helpful, true. But so were they. When he had problems getting through the divorce, they had been there with more than one shoulder to cry on or things to do to distract from the anger with the lawyers.

With a deep sigh he sat down at his table and started to file through the pile, looking for the most important one to work off right away. Steve stepped up from behind. "Now leave those papers alone and tell as about your vacation. Did they do a good job for your relaxation as they had promised in the radio? A real nice boring four weeks? Got that tension out of you and your thoughts on something else than that work your were on? C'mon, tell us all about it!"

Jan put the paper back on the pile. "Boring and quiet? Good for relaxation?" He let out a loud laugh and then his face turned serious again. "All I will tell you right now is that I quit this job. Yes, I'm leaving. You did me a favor with the surprise vacation. Now, I know what I really want from life. And that is not those papers!" With this Jan got up, took his jacket and left the room.

Steve and the others were speechless. After a moment of shock, Steve ran after Jan. Just to see him standing at the next office door, chuckling. "Why are you laughing? Are you playing a joke on us? What happened?"

Jan, still chuckling, took Steve by the shoulder and made him go back into their room and sat him down on the next chair. Then he looked at each one of them, smiled and started:

"You really did me a great favor with this unexpected, and free, vacation. Although it turned out quite different than from what the radio commercial had promised. Really, no need to feel sorry. I have enjoyed it fully. The first night was boring, so quiet. Only a short talk with a nice woman at the bar for a last drink. No, Marc, I did not take her to my room or visited hers. At least not that night." Jan grinned. Seeing his friends puzzled faces, he continued:

"As I found out the next morning, this woman had also won the vacation from the radio. Just a week earlier than me. And she was very, very bored at this luxury hotel. Massages, spa, the best food and high quality drinks. It was all there. But none of it satisfied her. Or me. Yes, already after that first night, I knew, I wouldn't stay there all four weeks. Then we had an idea. And the hotel was generous. They let us out of the booking, even gave back the money we hadn't paid." He paused, not knowing how deep into detail he would go now.

His colleagues stared at him. "And because of this woman you are leaving your job? Don't you remember how bad women are on you?" David called out enraged.

Jan blushed. "Well, yes, no", he stuttered. "Yes, I'm leaving the job here because of that woman. No, women in general are not bad on me. Just the last one was. Anyway, we left the hotel for a two week adventure hike and boat ride down the Grand Canyon. You know, all this stuff with being in nature, sleeping in a tiny tent, getting wet by day and mosquito bitten at night. It was fun. The true adventure though started the last week. And," he broke off grinning again.

By now, all four of them had hung on his lips, sucking in each word, expecting some more detail about this woman and the nature adventure. Jan had to laugh out loud seeing them so attentive and fascinated. If they would be that focused at work, all would turn out fine.

"And," he continued after that pause, "the adventure still goes on. We are moving together into a flat at the city edge next week. Our office will be moved to a building close to there too. All of you will quit your job here too. I want you to be part of the adventure. You are my friends. We do great work. And we can do better alone. This woman was our biggest adversary and is now our new boss. She will finance everything until we make winnings."

They were stunned. Jan went on: "If any of you don't feel comfortable, you can stay here of course. I'm not forcing you. It's an offer. And, yes, as you might have noticed before my vacation I had all that planned already. Even without meeting her. But it might have taken years of suspense to finally put it into motion and get it done. Now, it was only a Summer’s suspense."

Cheering loudly, all five of them left the building.

Written for the challenge of  +Writ during Summer 2012.

Posted by Unknown at 1:23 PM No comments:

I think, I'm finished. yes, I have finalized the squirrel painting by now too.
And that also six weeks ahead of the date I need it for (an exhibition show in my village with other artists).

Here now the photos of the last touches:

And now - viola - the final photo of the squirrel hanging on my wall: 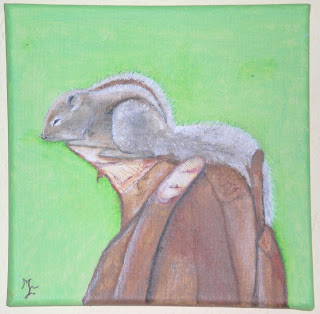 =)) Thank you once more Jasbir for your great photo for me to paint. 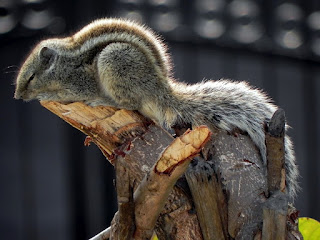 in whatever I do
I'm thinking of you
and how you feel
was it ever real?

all I'm feeling is the pain
of missing you again
What happened to our love?
that's all I'm thinking of.

for what I long
is long since gone
has it ever been there?
all I feel is despair 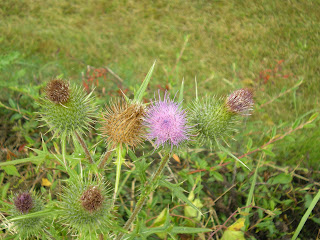 So, now that two of the three paintings in this "project" are finished, I have all the time just for the third.

Here an overview of the development of it. The first two pictures are when I was still working on all three of the paintings.

Since then I have done more to this painting. But slowly, with enough time for the color to dry between layers.

To actually paint the squirrel took me a week of hesitating. And I'm still not quite sure on how to get the fur "realistic" enough. This is the hardest part to figure out. A learning experience - and hopefully one that I can apply to that cat face painting I want to do since April.

A Walk in the Woods

Slowly, Summer is ending. It is not so hot anymore. The days are shorter. The trees are starting to loose their leaves. It does rain, but not continuously.
So, what to do on a warm, dry Sunday afternoon? I went for a walk in the wood close to home. And moved  a little off the main path, following small trails. Maybe, they are actual hiking trails, maybe they are trodden paths by animals. I did not walk through the woods wild. And was very careful not to destroy the flora in the wood that already is suffering from the drought.
Let me show you some impressions of this walk:

My "purpose" for going off-path was to check on a few big rocks I had seen from above. I found caves. If I were a rabbit - they sure would be nice for a hiding or resting place.


These two small caves were below these rock walls:

And then let's walk along those rock walls. There is a rustle in the leaves. Ah, a rabbit just hopped up this tiny canyon:
Smiling, not attempting to follow this rabbit, we follow the trails close the rock foot and hear water gurgling and splashing. There must a creek close by!!


Following the creek uphill to see were the spring is, the water stopped before we reach the edge of the ravine it flows in. 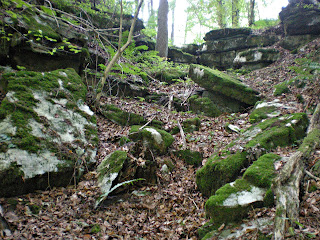 By now the walk has taken about an hour - time for a small rest before we leave the animal trails and go back to an official hiking path:


Until we reach the spring, the path leads to spring:

Walking back on the main paths now, The sound of running water suddenly is gone. The drought has made the small creek vanish in some places, to appear again a bit later. With some fish caught in the small ponds left. Hopefully it rains soon , so they can swim back to more water.


Finally another small bank to rest on and enjoy the scenery and atmosphere under the old pear tree before we walk back home. Passing a sole violet still flowering and some ferns. I hope, you enjoyed this walk with me.

For more impressions of rocks and wood, and creek you can go to my album for that day:
Walk in the Wood

The Flight of the Swallows

We have swallows here in our village. They live mainly at the portal to the church and brewery, former a monastery, first mentioned in 1100A.D. or so.

Here some photos I took this summer of them:and their nests: 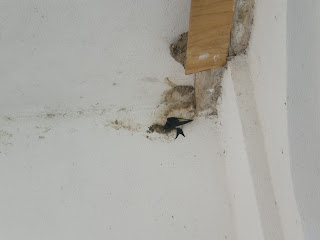 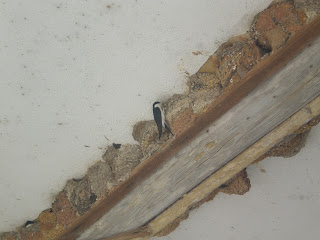 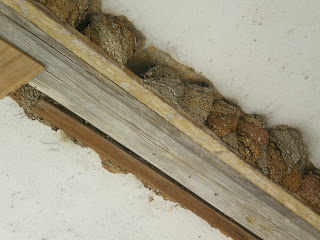 And a video in the early morning as I was walking to work. They were all swarming out for food and the first flights of the young ones to strengthen their wings:


And today, they were all here at my house, half way up the hill, but flying very, very low:


They flew for another hour or so this low. Then they moved a bit higher into the air and lower down into the valley - circling big Linden tree and the church tower.

Soon, they will all fly South for the Winter time they are expecting. I can already see them collecting en masse on wires.
Posted by Unknown at 2:34 PM No comments:

The last update was on the 20th August, nearly two weeks ago.
New Projects in Painting - Update


But I have not been idle.
So - here is how it went form the last update:

So, now I have some new paintings to show off when the art club I'm in finally does have an exhibition for once around the middle of November.