From Summer to Autumn . TREES

A year can get rather long if you wait for the seasons to change to take the proper photo of single trees.

Although Autumn - with colored and falling leaves - seemed to start a bit earlier this year (in August; which was only due to the dryness all Spring and Summer long),
the trees I have been photographing and thus watching took their time to show off the yellows and reds and half bare branches.

Finally they did; not all at the same time though.
It took about three weeks until I was satisfied with the change. Enough change to show the difference of Summer and Autumn on those trees.

So let's start with the Walnut and Cherry trees at the train station again:

Next set of images is the Linden tree:

The Bloodplum at my house:

The small tree at the other train station:

and the group of trees close to the wood where I go jogging in Summer.

Finally should come the Apple tree in the wheat field; but that one is still green AND the next season of wheat is starting to grow. It looks too much like Spring.

That will have to get it's own update once the leaves change color or have fallen off with still no snow around it. It's snowing today - rather early this year, but not the earliest ever!

And again I have noticed that there are more trees I have photos of - but forgot a season in between for this kind of report on them as well. Such is life!!

Posted by Unknown at 6:04 PM No comments: 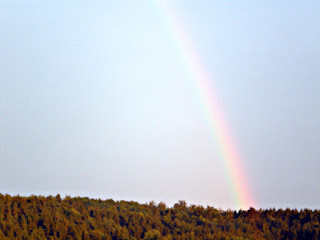 words written on paper - you forget until later

words written on stones - they mark your bones

words written on brick – a wall is that thick

words written in the air – you have time to spare

words written with water – worth a quarter

words written on earth – a place for your hearth

words written with fire – make them go up higher

words written on a tree – grows for all to see

words written in bronze – you get another chance

words written in gold – forever they will hold

words written in grey – on the way

words written in blood – start from the mud

words written in maroon – don’t give up so soon

words written in red – goes from feet to head

words written in orange – no need to flinch

words written in sun – having all the fun

words written in lime – for a healing time

words written in green – nature can be seen

words written in sky – far away to fly

words written in pink – laugh at what you think

words written in white – the world is so bright

words written in black – now go all the way back

Written in 2008, published here for the first time.
This piece is included in my book "Moments in Time".
It is now going into print.
I'm working on getting a e-book version of it done too.
Planned by the end of the year. If interested, let me know.
Posted by Unknown at 10:53 AM No comments:

I did it again.
I made a new painting.
From a good photo.
And documented the making of it with more photos.
It actually didn't take that much time besides the wait in between colors to dry.
(Size 15 c 15 cm)
So, here the progress:


Special thanks goes to Jasbir S. Randhawa once more for providing the photo (as seen in the small print out on the first photo here). Without that as basis I wouldn't have gotten the details of the wings. 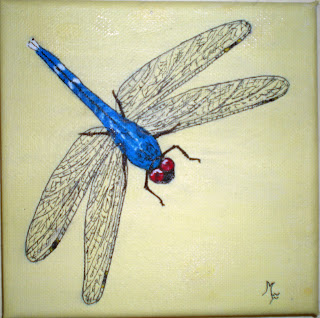 Radio Storms - in our Solar System

There is always something new to discover and experience. This time I was fascinated by the sounds of the radio storm recorded from Jupiter.

This one was on Jupiter a few nights ago.

Turn on your speakers and listen to it.

Information as found on www.spaceweather.com :


Two nights ago, there was a storm on Jupiter--a radio storm. Amateur radio astronomer Thomas Ashcraft recorded the event using a shortwave radio telescope located in New Mexico. Click on the dynamic spectrum (a plot of intensity vs. frequency vs. time) to hear the whooshing, crackling, popping sounds that emerged from his telescope's loudspeaker.
"Listen to the recording in stereo," advises Ashcraft. "I recorded the audio from two separate radios at 21.1 MHz and 20.9 MHz, so there is a stereo spatial effect from the frequency drift of the emissions."Jupiter's radio storms are caused by natural radio lasers in the planet's magnetosphere that sweep past Earth as Jupiter rotates. Electrical currents flowing between Jupiter's upper atmosphere and the volcanic moon Io can boost these emissions to power levels easily detected by ham radio antennas on Earth. Jovian "S-bursts" and "L-bursts" mimic the sounds of woodpeckers, whales, and waves crashing on the beach. Here are a few audio samples: S-bursts, S-bursts (slowed down 128:1), L-BurstsNow is a good time to listen to Jupiter's radio storms. The distance between Earth and Jupiter is decreasing as the giant planet approaches opposition on Dec. 3rd; the closer Jupiter gets, the louder it gets. NASA's Radio Jove Project explains how to build your own receiver.


As a kid I loved to turn the radio dial all the way to the end to hear all the squeaking and squawking and "white" noise, imagining it was aliens communicating with us.
But maybe, it just was Earth and space. ;-)

And Earth's magnetic field  "sings" too.

There are many more sounds in space, we just need to learn to listen to them.
It's not only with our eyes that we can perceive wonders. Our complete body can.
Ears, skin, and other sensitive parts we might not even be aware of yet.

We just need to be "quiet" to  sense those not so direct interactions of us with what surrounds us. Technical things can help, but some things not even those can perceive.

Posted by Unknown at 9:17 PM No comments:

On October 3rd, 2012 I went for a short visit to Burg Gößweinstein.

Sorry, the article is only in German! :(
But don't fret, as I have studied History for a few semesters, I can tell the tale in my own words, too, taking the information there and the ones given at the castle itself. :)

It was a nice Autumn day, cloudy, but dry and moderate warm.
So, this castle lies on top of a steep rock. It has been founded in the 11th century, just 25 km (direct air line) away from the big castle in Nuremberg.
Additions have been made over the centuries to it by various architects and users of the castle.
Some rooms have been restored in the last decade to show how it might have been furnished and used.
For a full description of the re-building and re-structuring of this castle, please check here:
Burg Gößweinstein

Most doors though were locked to  the public. (Entry fee only 2€ for adults - not much at all).
Coming up the hillside to the castle you are greeted by two signs: 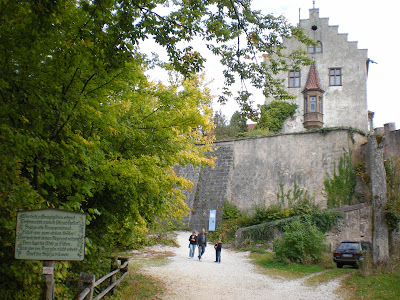 The one on the left describing some of the folklore:


(Translation; as best as I can get it:
Who built you, Goswinstein,
Needed quite some money,
Sigiza old squirebride.
Leads us to the steep attic.
Who floats up high above the abyss,
has the world at his feet.
And who is not scared of wrinkles
may kiss the Sigiza. )

The other sign has been added just a few years back (maybe even just last year - I don't quite recall) and has some more historic facts on it (as they have been researched for now) Much knowledge has been lost about this particular castle): 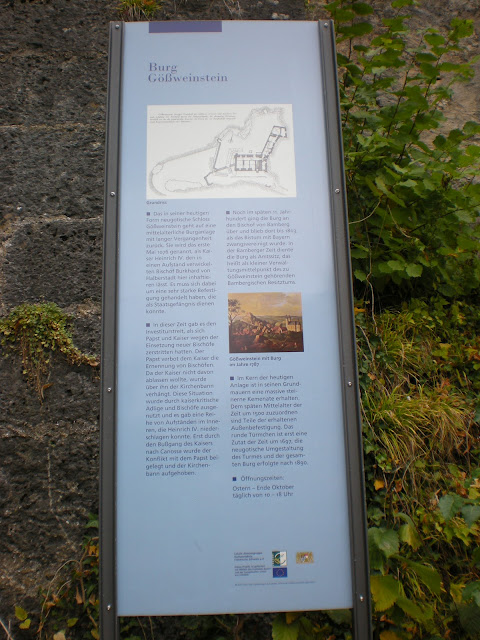 There was a small chapel (two rooms) with a locked door leading to the main house (it actually  wasan attendance room and was turned into a chapel in the 1800's) - crossing over the dungeon. It had a (restored) painted ceiling showing the sky. Unfortunately, I didn't take a photo of it as there were just too many people inside that small room.
But you can see it on this folder - the left lower corner photo. Interestingly, those metal gears are from a clock that had been in a tower that was torn down. There was also some color window paintings in the next room.
Here an impression of the dungeon. The actual hole in the ground was covered with a metal grid and surrounded with a railing. The bones you can see are not ancient. 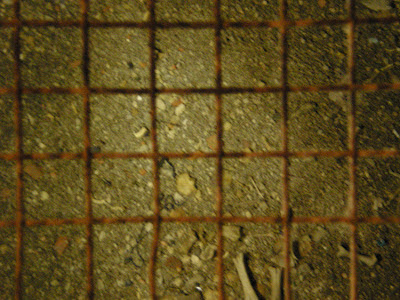 The entrance was lower than a normal door, with a few steps leading down and in a half curve. It smelt moldy in there. But not scary at all.

In the main part of the castle, open to the tourists, were only two rooms. Both reconstructed: one showing the ladies sleeping/living room and the other the one for the men and visitors of the castle. Nicely done but not true to the way the castle was actually used. Anyway, here the photos I could get of those two rooms:
Woman's room:
Men's room:

Between those two rooms was a long stone staircase leading down, the official entrance to the castle; locked to the tourists.
After exiting the castle again I walked along the path between building and wall. Looked rather new to me; seems it was established only back in the 19th century as well. But from there I could get a good shot of the "window" of the woman's room: 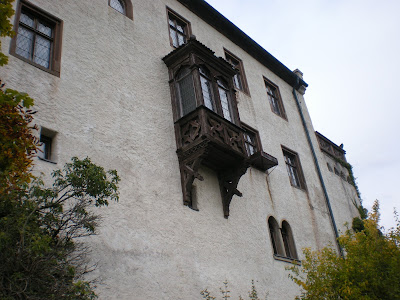 And, of course a view of the other valley with the town below the castle. By now the weather had turned to more overcast and slight drizzling rain. Still good enough to explore the modern town though.

On the way back down, I shot these two photos: the first showing the castle itself in full view, the other some more steep rocks close by. 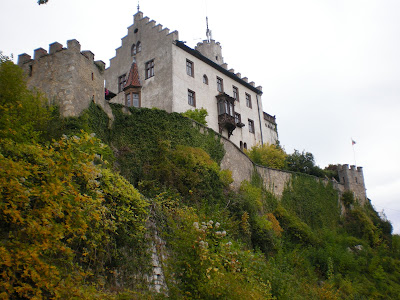 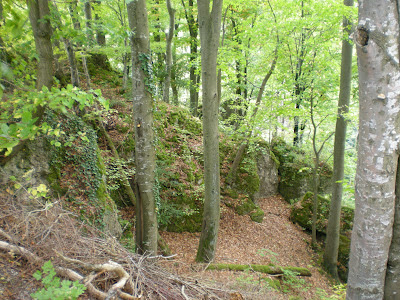 Now, this small historic excursion is through. I hope you enjoyed it as much as I did.

Posted by Unknown at 4:01 PM No comments:

I had thought recently this experiment to have failed and the bush dead. 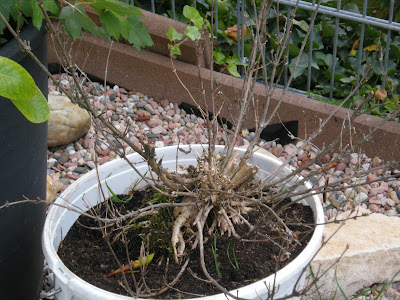 I was going to discard it. But then the cold weather set in and it was wet, too wet (and cold) for my taste to be playing in the dirt.

Today though, with warm sun and before the weather would change to final Autumn cold and wet for some longer time again, I was back in my garden mowing. By chance, I was on my knees and looked at the bush.
Dry brittle twigs nearly poking my eyes, when suddenly °.° 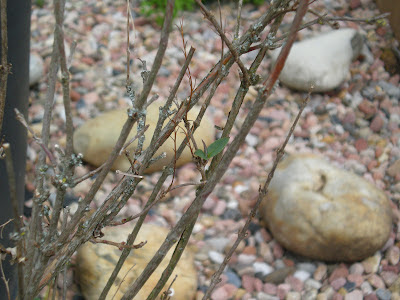 So, of course, now even more than before, I will have to take this bucket Bonsai bush into a frost free area over winter ---

find a new place for it to grow in (pot or nice spot in the garden where it can stay).
Posted by Unknown at 4:45 PM No comments:

Finished already last Autumn - now placing it into my blog: 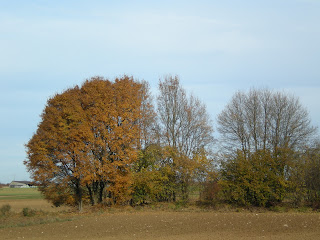 Posted by Unknown at 3:10 PM No comments: